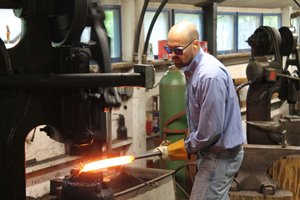 Son, Valerius is hard at work forging a soon-to-be masterpiece for a client.

Meet the Kochanowskis: A family of Polish American blacksmiths with a multi-generational legacy in Wisconsin. Boleslaw, a third-generation metalworker and the patriarch of the family, runs the “Boleslaw Kochanowski” blacksmithing shop with his wife Anna and three of their children, sons Vincent, August, and Valerius. They specialize in creating architectural fine metals and art sculptures made primarily from steel and iron — a craft that requires lots of time, patience, and coke.

Boleslaw’s talent for blacksmithing began while working on the Chicago, Milwaukee, St. Paul, and Pacific Railroad (often referred to as the Milwaukee Road), alongside his father. There, he strengthened his metalwork trade and learned mechanical and technical drafting.

However, Boleslaw’s passion for blacksmithing was manufactured long before his work on the Milwaukee Road by his family’s legacy. Boleslaw's father was a blacksmith in Poland who apprenticed under Boleslaw's great uncle; He later became the head blacksmith for the Chicago Transit Authority. 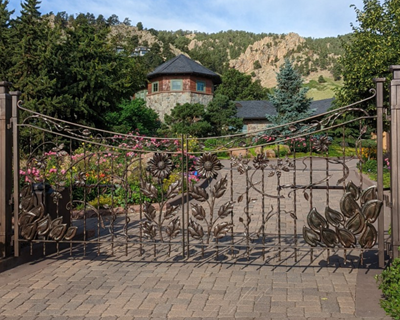 These hummingbird sections are part of a much larger exterior project of rails.

Looking to accelerate his craft, Boleslaw opened his own business with the help of his father in 1980. He moved to Portage County, Wisconsin, finding an overwhelming population of Polish Americans, referred to as America Polonia by Boleslaw. For six years, Boleslaw worked in the structural steel business. In 1986, in honor of his dad, great uncle and their history and skillset in blacksmithing, Boleslaw transitioned to a more artistic side of the trade – architectural ironwork, home décor, and functional and fine art — and continues to carry on his family’s historic tradition of craftsmanship, with a flair of creativity today.

Boleslaw still draws on his Milwaukee Road days by drafting all his projects to show his clientele before he and his sons transform the ideas from paper to reality with a hammer, anvil, and forge.

“It’s the medium that we use in forging … it shows the hand work — just like artists with a pencil drawing, a hand drawing is better than a photograph because it brings out the character,” Boleslaw says.

To shape the metal into a piece of art, a blacksmith must first heat the forge to extreme temperatures with an energy source. For Boleslaw, that energy source is coke. Coke is a type of fuel made from coal and is not easy for a blacksmith to come by. The Kochanowski family was receiving their coke fines all the way from Gary, Indiana — a nine-hour roundtrip drive. The lengthy travel time offset the business value of the coke. 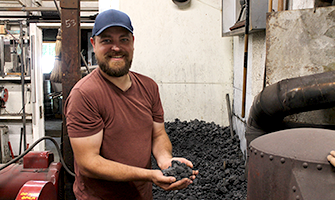 Son, Vincent Kochanowski is pictured above holding his coke fines that are used to create Boleslaw Kochanowski projects.

Boleslaw’s son Vincent Kochanowski, and Timothy Stewart, an industrial engineer at Waupaca Foundry’s Plant 1 location in Waupaca, Wisconsin, had previously developed a relationship at a school function that both families were attending. They also realized that they both went to the same church and would casually keep in touch after services. The conversations, ranging from occupations to hobbies and pastimes, soon led to coke fines. Stewart shared with Vincent that Waupaca Foundry uses coke to cast ductile iron and gray iron castings and that the leftover coke fines could be of use to the Kochanowski family and their business.

The coke that Waupaca Foundry procures is trucked to the foundry in varying sizes. Upon arrival, the larger, usable foundry coke is sifted and separated from the smaller coke fines. For decades, the unused, smaller coke fines were returned to the supplier. Stewart learned, however, that the size of the coke fines is perfect for a blacksmith’s forge.

The Kochanowski family now buys the unused coke fines, as needed to mitigate its supply disruption. In a time of increased energy and fuel costs, Waupaca Foundry was able to help out a small business by saving time and resources. Overall, the partnership transforms what would be unusable to Waupaca Foundry into an enabler of art for the Kochanowski business.

"We're craftsmen and were artists," Boleslaw says. "Art is very important in our life, and everything we're doing has a lot of artistry."