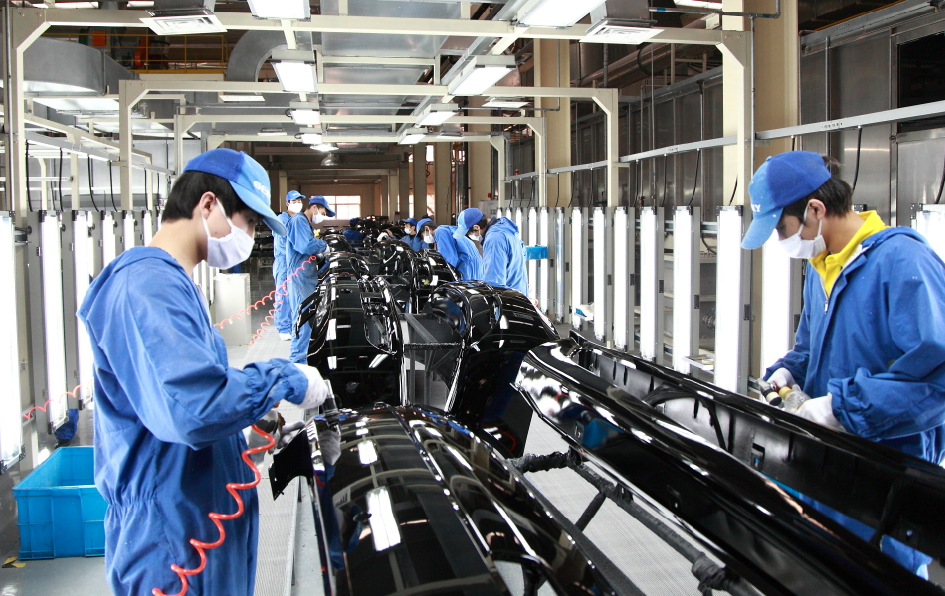 True or false: Chinese labor remains cheap, so American auto workers will continue to see their jobs slip away to China.

False. Not because Chinese wages are suddenly expensive, but because labor costs don't matter as much as they used to.

What counts are total manufacturing costs, and America is starting to look very competitive. China's manufacturing cost advantage over the United States has shrunk to just 1 percent, according to a study by the Boston Consulting Group published this year.

What's going on here? America's higher levels of automation and lower input costs (such as electricity) have triggered dramatically better productivity. UAW wage concessions are playing a role, too.

Before we get any further, let's sort out China's labor costs.

Your average line worker at a UAW-represented American assembly plant today makes about $29 per hour, although starting wages can run as low as $16 an hour.

In China, hourly pay for the same work ranges from $4.20 at companies such as Geely and BYD to $9.00 or so at Daimler's joint-venture assembly plant in Beijing.

To be sure, that's a significant gap. But the average line worker on China's east coast takes home more than counterparts in Mexico and Brazil. And Chinese manufacturers are feeling the squeeze.

Many are scrambling to improve productivity by investing in world-class machine tools.

Last month, I walked through Triangle Tire's new plant in Weihai, a small town on China's east coast. The plant turns out 18,000 tires a day and exports to more than 50 countries. Operations were totally automated save for a handful of employees watching over the machinery. Robots weaved up and down the aisles.

I asked the plant manager where all his workers went. He shook his head and said: ˇ°Our chairman said he wants to see zero workers inside his plant!ˇ±

It's not just higher wages that bother Chinese companies. ˇ°Transportation costs are the next ˇ®labor cost,'ˇ± says Paul Stepanek, president of CMD, a Shanghai company that does manufacturing outsourcing for small- to medium-sized U.S. companies.

ˇ°Whoever produces in the most technologically advanced hub or is closest to the market will be most competitive,ˇ± Stepanek added.

To ease shipping costs, will some companies that chased cheap labor to China start migrating back to the United States?

It's already happening, according to the Reshoring Institute, which is affiliated with the University of San Diego. An estimated 60,000 manufacturing jobs have returned to the U.S. from China, according to the institute.

That's a good indication that suppliers consider U.S. manufacturing costs to be competitive, said Rosemary Coates, the institute's executive director. But the big payoff will be fresh investment in new U.S. factories, rather than the transfer of tooling from China.

Coates added that the new jobs are ˇ°about running computers, 3-D printing and directing robotsˇ± on the shop floor.

It appears that the Chinese have gotten the message, too. Fuyao Glass, one of the auto industry's top five glass producers, is investing $1 billion (6.6 billion yuan) to produce windshields and windows in Ohio and Michigan.

And Nexteer, the suburban Detroit maker of steering systems, has renovated its factory complex in Saginaw, Mich., with the blessing of its Beijing owner, Pacific Century Motors.

So just like that, competition has been flipped on its head. During the 2000s, China won the race to the bottom on wages. Today, there is a sprint to the top in manufacturing productivity.

There is a ˇ°yes, butˇ± to the emerging picture: American factories will hire more workers, but their head count will remain lean. With high levels of automation, you don't need as many people to get the work done.

Nevertheless, America is the new manufacturing magnet -- for American and Chinese automotive investors.

How about that for a head-turning change?