Cold for a Cause: Participants plunge for Special Olympics 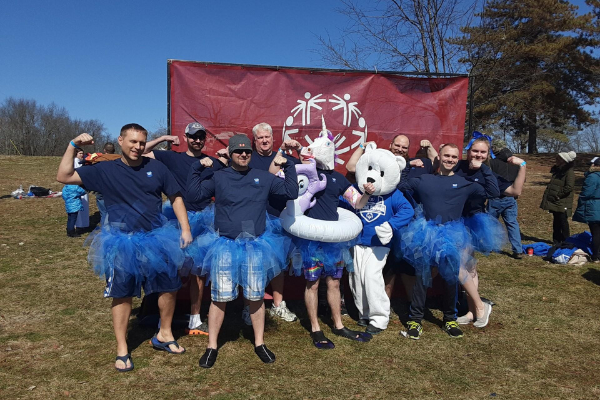 Cold for a Cause: Participants plunge for Special Olympics | Local News | effinghamdailynews.com

Two-hundred-forty-four participants plunged into the chilly waters of Lake Sara on Saturday, some dressed in costume while others donned Polar Plunge T-shirts. In total, the participants raised $42,432.26 according to Saturday’s totals.

The below 40-degree temperatures did not keep some plungers from returning to the event. The Marshall Lions plunge team returned for its sixth Polar Plunge event.

The group wore large laminated McCormick spice labels and called their group the “spice girls and babies.” Team member J.J. McFarland said some of the team members have plunged for all six years while others were experiencing their first event.

The Polar Plunge, which raises funds for Special Olympics Illinois, is close to the hearts of the Marshall Lions team.

“We’re all teachers, and we always take a group to the spring games. That’s why we’re interested because we teach in special education,” McFarland said.

McFarland said before the plunge the group hoped to win the group costume contest as they had won last year, but this year’s title went to the Effingham Lightning Special Olympics team who dressed up as penguins from the movie “Happy Feet.”

Also returning to the Polar Plunge was the Neoga and Sigel Indians. The group dressed as iPhone emojis for the event.

While the Neoga and Sigel Indians coach Amanda Osborne was the one to come up with the emoji costume idea, Brinkopf surmised Osborne chose the theme because the journey to the Special Olympics often comes with a variety of emotions.

“We work with students with a range of abilities, everything from cerebral palsy to special deficits and different special needs that we work with. At times, emotions kind of run the gamut, so I think we’re kind of representing some of that, as well as just something fun to get people excited and laughing,” Brinkopf said.

Sporting more “wild” costumes were another team of athletes from Effingham. The group took on a zoo theme, with the athletes wearing animal onesies and athlete parent Lisa Todd dressing up as a zookeeper.

At the “post plunge” dinner at the Effingham Event Center following the plunge, participants received awards. Ken Thompson of Windsor once again took home the prize as the top individual fundraiser; Thompson raised $5,300 this year, cutting through his 2019 goal of $4,000.

At the after-plunge dinner, Bradlee Todd summed up the event in just one word: cold.

This was the 16th year for the event in Effingham.