With nearly 100 robotics in use, Waupaca Foundry has adopted the Lean robotics methodology to further the vision of a highly-automated, modern metalcasting operations that optimize robotic operations, continuously. 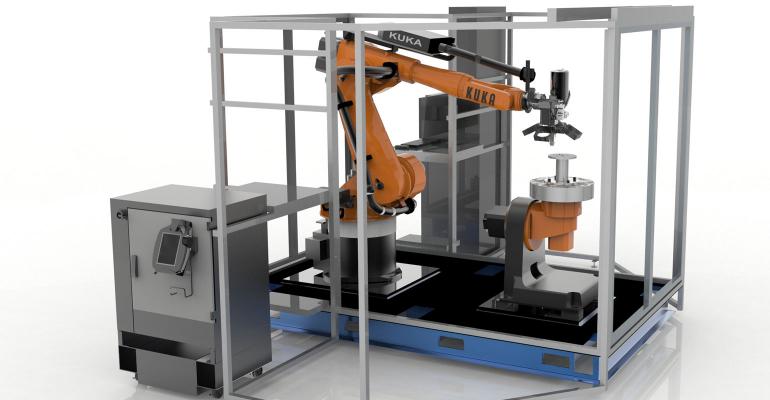 Perhaps more obvious is that robotics technologies exist outside the parameters of any specific manufacturing expertise — metalcasting, for example. Foundries and diecasters are a defined market sector for many robotics developers, and yet the skill needed to program and operate these units is apart from the metallurgical, mechanical, or design engineering that characterizes most metalcasting personnel.

But look at these facts: Global shipments of industrial robots totaled 240,000 units in 2015, up from 159,000 units in 2012. The growth in sales is largely driven by automakers and manufacturers operating in the automotive supply chain, and consequently, the “robot density” is higher in countries with high concentrations automotive manufacturing. In Japan, for example, there are 1,562 industrial robots installed per 10,000 automotive employees.

And do not suppose that the demand for industrial robots is level or declining: recently ABB Ltd. made it known that it is expanding production at its ABB Robotics business unit, including at a new robot manufacturing center in Michigan, which produced and shipped its first robot earlier this year.

Of course, ABB Robotics is one of the developers that builds automation devices specially engineered and kitted to perform tasks like handling fragile cores and heavy sand molds, pouring and treating hot metal, tending diecasting machines, or finish-grinding high volumes of cast parts. These tasks are demanding and risky for human operators, but robotizing the workflow is often the means to higher throughput, greater productivity, and lower manufacturing costs.

What is not always apparent to the metalcasting operator is the potential for new production capabilities that follows a robotic installation. Again, this may indicate better familiarity with their own manufacturing disciplines more than the parallel activities of industrial robotics. Frequently, new robotics capabilities have been pioneered in some other industry and adapted to a particular metalcasting need.

If some metalcasters and other manufacturers are wary of adopting robotics, they may be sensing the enormity of the organizational change that will follow. Last fall, Stratasys and Siemens offered a glimpse of how robotics is a link in the much more expansive manufacturing concepts of digitalization, Industry 4.0 or the Industrial Internet of Things (IIoT.)

Of course, Stratasys is a developer of additive manufacturing systems, as well as a producer of additive manufactured parts — including 3D-printed wax patterns for investment casting. In one of their collaborations, Stratasys and Siemens created a link from Siemens’ NX software for CAD/CAM/CAE to Stratasys’ GrabCAD Print platform – so that product designers and manufacturers will have” a seamless design-to-3D print workflow. Last fall, they presented the Stratasys Robotic Composite 3D Demonstrator that incorporates Siemens’ product lifecycle management (PLM) software and its motion control and CNC automation technologies, to produce performance-grade parts in a workcell.

Stating an intention to help customers adopt “a new manufacturing mindset,” one Siemens exec said the partnership with Stratsys puts them on course for “on-demand production and mass customization.”

The robot tending this additive manufacturing process might as easily be tending a high-pressure diecasting machine, or setting cores or pouring metal into a mold. The insight to the future of production is how the product design is coordinated with the production programming needs, and how those information are delivered to the work cell where manufacturing takes place..

“Siemens’ capability and commitment to the digital enterprise vision, along with its close collaboration with Stratasys, can help many industries realize shorter time-to-market, achieve flexibility in operations and improve efficiency in workflows through horizontal (machine-to-machine) and vertical (plant and top-floor to factory floor) integration,” according to Arun Jain, of Siemens Digital Factory business.

The demo unit presented by the partners last fall centered on a Stratasys fused-deposition modeling (FDM) additive manufacturing system, itself based on extendible and scalable architecture that can integrate with other processes (subtractive manufacturing, forming, inline inspection and verification, product finishing) to produce designs optimized for weight and performance. It is a new hybrid manufacturing approach.

The workflow is rooted in Siemens’ NX software, which allows designers to create parts, simulate the production, evaluate the design for manufacturability, and generate and send the manufacturing instructions for part production. The manufacturing performance is controlled and communicated directly to the manufacturing operations management systems.

This CAD-to-product workflow streamlines production and ensures traceability and part quality, and represents a template for a manufacturing process centered on automated production — with a robot as one link in the chain.

Another robotics expert, Comau, also relies on the Industry 4.0 concept and phrases like “factory of the future” to focus manufacturers’ attention on its developments. Earlier this year it demonstrated a work cell with multiple automation units, including guided vehicles. “The production process is becoming articulated through the use of ‘cyber physical units,’ which are intelligent, easy-to-use, capable of working independently, and in total safety” with human operators.

Physical installations like these work cells project flexible, scalable, and well-coordinated manufacturing operations, but the technology informing and guiding such systems are interactive, addressable, and fully connected to a much broader network of data and activity. If this is a view of the near future of manufacturing, some manufacturers may need more help understanding how to manage and program such an open-ended vision.

That creates an opening for another new concept in the robotics space, “Lean Robotics,” pioneered by Robotiq CEO Samuel Bouchard.  His company is a primary developer of collaborative robotics, so the emphasis on programming and functional control is fitting.

Lean Robotics is also the name of Bouchard’s book, in which he details a methodology that he contends every manufacturing plant can pursue to simplify its deployment of robotic work cells. The goal of such deployments, he indicated, is to resolve the well-documented skills shortage, to gear up faster for new production programs, and to save manufacturing costs. In each of these it’s clear that the plant operators are managing the deployment, and the programming — in other words, they have an oversight role that is not as apparent in robotics systems in which network connectivity and data exchange are the priorities.

“If you're a first-time robot user, how can you get started?” Bouchard asks. “How do you get from your initial idea to a productive, working robot? If you’ve already got a few robotic deployments under your belt, how can you scale up your robotics efforts throughout your factory—or across multiple factories?”

“Lean”, of course, is a familiar approach for manufacturers, and it’s bound to attract some followers in its application to the robotics frontier. The Lean robotics methodology emphasizes that robots are tools for humans to use, and it identifies human technical skills that should be instilled in operators, and applied in order to optimize robotic operations, continuously.
#automation