If you were to ask Douglas Daggett to list out his 23-year military career for you, from the location of his 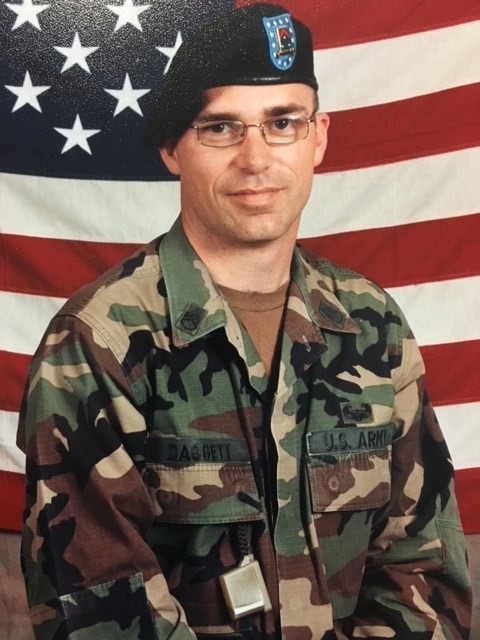 Douglas Daggett, served in the military for 23 years.

assignment to his rank at the time, he would be able to do so without even stopping to think — a testament to his attention to detail.

Dagget’s military career started when he was attending college in Sioux City, Iowa and decided he wanted to do more. He called his best friend to share that he was thinking of joining the Army. Coincidentally enough, his friend had already joined that morning, and it solidified Daggett’s plan to enlist.

Daggett, an Iowa native, joined the Army on October 14, 1992 and attended basic in Fort Jackson, South Carolina. He did his advanced course at Fort Jackson as well where he became an Admin Specialist. He then traveled to El Paso, Texas for his first duty assignment as a security manager for William Beaumont Army Medical Center at Fort Bliss where he resided for 18 months. A part of the Bravo Company, he soon after became a company clerk and served in this role until 1996.

When Daggett reenlisted, he decided to go into supply and was sent to Fort Lee, Virginia where he took an advanced course on the subject and became a Supply Sergeant.

A part of the HHC 304th Signal Battalion, Daggett was sent to South Korea for a year, from July 1996 to 1997. After, he was moved to Fort Drum in New York, a part of the Bravo Company 1-87th Infantry Battalion, until 1999. When his term of service was complete, Daggett decided to join the New York Army National Guard. After four months, he was transferred back to his home state of Iowa where he started in the STARC unit. Six months later, he was transferred to a support company in Davenport, Iowa. Four months after that, Daggett joined the Active Guard Reserve in Orlando, Florida. From 2001 until February 2002, Daggett resided in Florida until he was transferred again, this time to Tennessee.

Now a part of the 278th Armored Cavalry Regiment, Daggett trained for six months at Camp Shelby, Mississippi before being deployed to Iraq for the first time from 2005 to 2006. He would later return to Iraq again in 2010 for six months.

After a 23-yearlong adventure, Daggett retired from the National Guard with the title E6 Supply Sergeant.

Daggett knew he wanted to stay in a logistics or supply field and applied to Waupaca Foundry, a place of employment many of his former servicemen were now working. He began working at Waupaca Foundry on August 8, 2016 and is now a stockroom attendant.

When asked to reflect on his time in the Army National Guard, Daggett laughs and mentions a time when in South Korea, “Michael Jordan's older brother was in my unit,” Daggett says. “We would always see him shooting baskets, but he wasn't as tall as Michael Jordan, and he definitely couldn't shoot like Michael Jordan. But if he saw him out of uniform, he wore nothing but Nike clothes.”

On the more serious side, though, Daggett reflects on his time in the military as a transition to growing up.

“You have to get responsible, quick, because of the things that you're in charge of,” Daggett says. “Even as a private as a security manager in the hospital, we had three units, and then all your civilians. [I was] looking at keeping track of almost 3,000 files, and I was a courier for the hospital. So I would have to go pick up secret documents, read them and brief certain people. So, I always had very responsible jobs while I was in the military, and I think that helped me.”

Martin nominated Daggett to be the Etowah plant’s veteran spotlight this year, and when asked why Daggett was a good candidate, “Three words that come to mind when I was thinking of explaining Doug is ‘attention to detail.’” Martin says. “Never had to worry if you had the right equipment for the mission. He does the same thing here at the foundry.”

Waupaca Foundry is proud to employ the men and women who have served our country. Ten percent of our employees have served in uniform, and we thank you for your service.