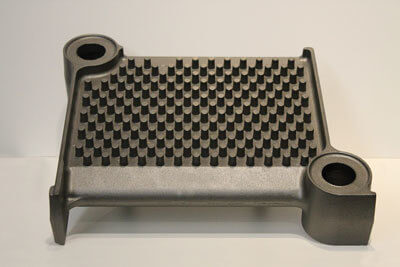 One year after Hurricane Sandy slammed into 24 states, rebuilding efforts continue along the east coast. We'll take you back on the one year anniversary of the storm to a time when a nation united to help Sandy's victims' and Waupaca Foundry played a role.

It's estimated that Sandy destroyed more than 300,000 homes, and in the aftermath construction suppliers were hard-pressed to meet rebuilding demand. Our customers, Slant/Fin, ECR and Weil McLain, were in critical need of residential and commercial boilers to replace the thousands lost in the storm before winter's cold hit the coast. These companies turned to Waupaca Foundry and our high quality gray iron castings for help.

According to John Davidsaver Jr., customer service manager at plants 2 and 3, Waupaca Foundry acted fast. "With winter approaching, we had very little time to react and immediately began producing parts for this effort," he said. The president of Slant/Fin visited the plants in Waupaca to underscore the need for Waupaca's support. Weil McLain explained New Jersey Governor, Chris Christie, personally spoke with them asking for help.

In just three months at the end of 2012 and the beginning of 2013, nearly 175,000 boiler parts were produced and shipped for Slant/Fin and other customers. In order to meet the immediate needs of those affected by Sandy, our team worked overtime and weekends.

In a letter written by Slant/Fin President Adam Dubin, he thanked Waupaca Foundry for being a "first class supplier," and stated "In a business world where it is increasingly about business first, Waupaca Foundry proved that people and relationships still matter."

At Waupaca Foundry we're proud to have helped communities rebuild after Hurricane Sandy.  We'd love to hear your story of support.