When many manufacturers are struggling to fill jobs, Waupaca Foundry is focused on developing its current employees and looking for hardworking individuals to join its team to meet growing demand for iron castings. 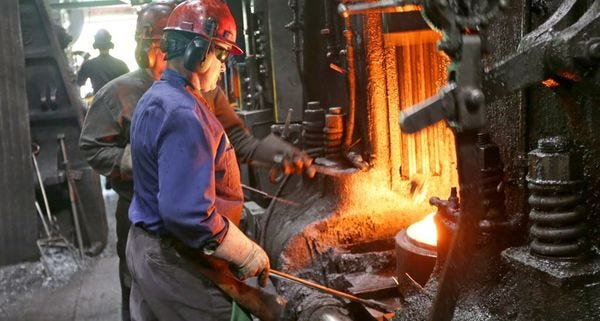 Seeking hired help, Milwaukee Forge affixed a banner in front of its factory on E. Oklahoma Ave. advertising jobs that paid $12 to $25 per hour.

It wasn’t getting much attention, though, so the company crossed out the $12 figure and replaced it with $15. That helped, said Todd Dunnum, human resource manager for the 104-year-old maker of gears, shafts, sprockets and more for a plethora of industries.

“We are seeing quite a bit of walk-in traffic as a result of the sign,” Dunnum said.

Yet even as the number of manufacturing jobs has fallen, many companies say they’re having a hard time filling positions that increasingly call for advanced skills.Wisconsin’s manufacturers lost 3,784 jobs from December 2015 to December 2016, a drop of 0.8% in the state’s manufacturing headcount and a steeper decline than the national average in the sector, according to data released Wednesday.

A quick search of the Department of Workforce Development’s website this week showed there were 5,990 job postings for production workers in the state, including 2,592 in northeast counties and 1,705 in the southeastern part of the state.

Some of the postings were for multiple positions, especially at larger companies.

“I know of employers who are turning down work because they don’t have the manpower to do it,” said Jim Golembeski, executive director of the Bay Area Workforce Development Board in Green Bay.

“We are still seeing a sizable demand for skilled workers in manufacturing,” he added.

Milwaukee Forge says it’s looking for people with at least two years of manufacturing experience but not necessarily at a forge shop, where steel is heated to 2,000 degrees and hammered into shape.

Ten of its 85 employees have been with the company for 40 or more years. Retirements are coming soon, and the senior workers won’t be easily replaced.

“These guys are craftsmen. What they do is an art form,” Dunnum said.

Most of the Milwaukee Forge employees belong to the United Steelworkers union. The average age is 54, with 25 years of seniority, underscoring the need for younger talent in the near future.

Metal-forge work is physically demanding, especially on hot summer days, and it's not for someone skittish about working in a heavy-manufacturing setting.

“It’s not easy to find people … and we aren’t just taking anybody who walks in off the street. We are looking for long-term relationships,” Dunnum said.

The Department of Workforce Development held a career expo Thursday at Wisconsin State Fair Park, featuring about 125 employers with more than 3,200 job openings. Of those jobs, 850 were in manufacturing.

The event was limited to employers with openings and job seekers already screened for work readiness. Some of the manufacturers included Harley-Davidson Inc., Briggs & Stratton, Brady Corp., DRS Technologies and Rockwell Automation.

Wages for the manufacturing jobs at the career fair ranged from about $15 to $19.60 per hour.

“The need for talent is very real,” Maxwell said, and manufacturers are seeking people in sales, information technology and administration, as well as employees on the shop floor.

There probably isn’t a better time to get into manufacturing, said Douglas Fisher, who teaches supply-chain management classes at Marquette University.

His students are focused on areas such as "Industry 4.0," the latest iteration of advanced manufacturing and product distribution. Recent graduates from his program, Fisher said, have had about a 95% job placement rate – with many of them landing positions in the Upper Midwest.

Many of Wisconsin’s manufacturing jobs are at metal products firms such as Waupaca Foundry, which employs about 2,400 in Waupaca.

The foundry has turned to robots and automation to streamline its production, and that’s resulted in a demand for workers with advanced technical skills.

“We’ve done quite a bit of job promotions from within … rather than banging our heads against the wall trying to figure out where to find these people,” said Joey Leonard, Waupaca Foundry vice president of human resources.

About 10% of the company’s 4,300 employees nationwide will be eligible for retirement in the next five years. Management isn’t panicked over that, but it’s concerned.

“We don’t have hundreds of job applicants lined up like we did 10 years ago,” Leonard said.

The foundry allows some production employees to take technical college training as part of their regular workweek. The starting wage is about $15 per hour, and the amount someone can earn quickly escalates with overtime and weekend premiums.

“We are pretty busy and have been for some time,” Leonard said.

Companies looking to open a manufacturing plant in Wisconsin, or expand operations here, are paying close attention to the labor market. They won’t take those steps if they can’t find the help they need.

Gone are the days when sprawling factories employed a seemingly endless number of people, but manufacturing jobs still pay the bills for many households.

Milwaukee has seen some successes, including the redevelopment of the Menomonee Valley and other industrial areas that had fallen on hard times.

There’s still a pressing need for employees such as machinists and CNC machine operators.

“Any of those skilled positions are difficult to fill,” Laurent said.