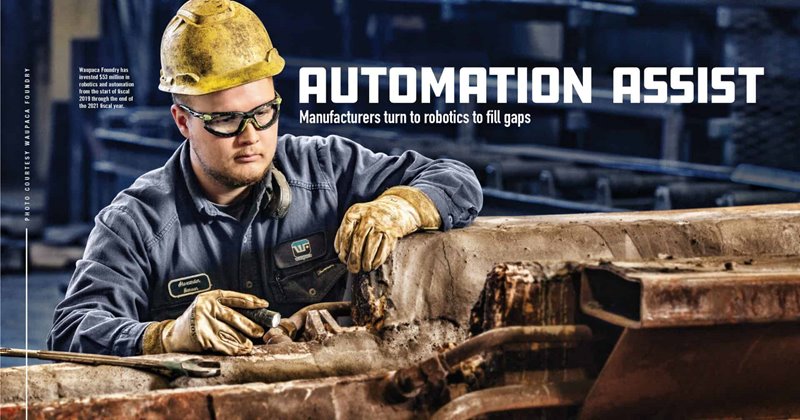 Each year, Masters Gallery Foods supplies an estimated 250 million pounds of cheese to grocery stores, restaurants and wholesalers. To keep up with the demand, automation is necessary as the Plymouth company’s 53 robots place products on packaging film, package them into cases and place the cases onto pallets that are then moved into cold storage.

“For safety, the robots take away the human ergonomic issues of lifting, bending and repetitive motion,” says Tim Lenz, Masters Gallery’s director of technical services. “For quality, the product that is being handled is never touched by a human hand, which reduces the bacterial risk. Production times also improve due to the speed at which robots can move, far faster than their human counterpart.”

Masters Gallery is one of many manufacturers across the region using robots and automation to keep up with consumer demand, especially as many companies struggle to find enough workers. The manufacturing sector, by and large, continues to do well despite the pandemic and resulting recession.

Manufacturers embrace automation for several reasons, including improved safety and increased productivity. At Waupaca Foundry, CEO Michael Nikolai says using robots has allowed the company to improve the quality and consistency of its castings.

Manufacturers know automation works. A 2018 PwC report found that nearly 60 percent of manufacturers already use some form of automation. Ninety percent of modern robotic equipment is found in factories and engineered to make production more efficient, the study found.

Another benefit — especially in food and beverage manufacturing where product safety is paramount — is that automation can track products from raw materials to a final packaged product. That way, products with a defect can be tracked back through the system to see where the error occurred, Wilson says.

While some analysts say automation decreases the overall number of manufacturing jobs, statistics show that simply isn’t the truth. Manufacturers continue to struggle finding enough employees to fill their open positions and with employees retiring faster than they can be replaced, that problem isn’t going away soon, according to a 2019 analysis from the Wisconsin Policy Forum.

The worker shortage isn’t unique to Wisconsin. Deloitte and the Manufacturing Institute estimate that 4.6 million manufacturing jobs will become available through 2028. Of those 4.6 million jobs, 2.4 million will go unfilled due to a shortage of skilled workers.

Wilson says robots don’t take jobs from humans but rather help maintain productivity and create safer working conditions. “Qualified employees are still needed to maintain and operate machines. Robotics are not necessarily job takers but are there to protect employees from tasks that could do them harm,” he says.

Automation usually impacts manufacturing jobs that people may find boring or overly repetitive or present safety risks and cause ergonomic injuries, says Jarrod Osborn, vice president of manufacturing and engineering for Waupaca Foundry, which utilizes automation at all of its locations. Robots, for example, unpack pallets, pick up raw castings and take them to CNC machines and then over to packaging.

“The robots remove the operator from positions that weren’t ergonomically the best and could cause injury,” Osborn says. “Humans then provide jobs with a higher skill set. Robots are changing the jobs available and the ones we are recruiting for. The higher-skilled jobs are attractive to job seekers. They also see the automation and are attracted to it.”

As robots fill some jobs, Wilson says that allows manufacturing employees to take on higher-skilled work, with more computer programmers and engineers being hired.

That’s the case at Sargento Foods, says Bruce Wisnefske, Sargento’s director, advanced manufacturing operations. He says the benefits of automation allow Sargento “to use automation as a complement to our workforce, not as a replacement.”

Automation also allows manufacturers to increase the number of hours their machines are operating. Using automation, manufacturers can run two shifts, with the second shift running in a “lights out” mode, which means workers check on the machinery on a daily basis, but the machines are then left to run overnight, Wilson says.

“There are many benefits that we realize using automation,” Wisnefske says. “Most applications where we utilize robotics are in areas where the operational speed makes it more efficient to utilize robotics versus manual systems. In addition, using automation opens opportunities for employees to shift from repetitive tasks to positions that add even more value to our operations.”

At Masters Gallery, which began using robots in 2011, robots work autonomously in an enclosed cell and provide improved safety, quality and production times, Lenz says. Employees start and stop the machines and change the recipes as needed.

That’s a common setup in manufacturing facilities with robots working on their own with some human guidance. In some cases, people work with cobots, collaborative robots intended for direct interaction between workers and robots within a shared space.

When investing in automation, Wilson says it doesn’t need to be a full system installation or even a fixed-base piece of equipment. There are plenty of low-cost options, such as machine vision systems or part feeders, that can introduce automation into a single production cell. Those small steps can provide manufacturers a chance to see how robotics will work for them.

“From fiscal 2019 through fiscal 2021, $53 million has and will be invested in robotics and automation,” he says, adding Waupaca Foundry works with Fox Valley Technical College to train employees to work with robots and also has its own training program.

The additional robots are part of Foundry 4.0 at Waupaca Foundry, Osborn says. The robots work in cells that are interconnected with other cells and eventually will start communicating with one another and other processes in the factory. Using artificial intelligence, the computers running the robots collect and process data to make decisions and communicate with other machines.

“They can send text messages to an employee if something is off,” Osborn says. “We expect to see more advancement in the next few years with how they communicate with each other.”

Wilson says manufacturers often start with a few robots and add on as they see the benefit. That’s the case at Waupaca Foundry, which had 125 robots a year ago and today has 135.

“We’re seeing a progressive increase in the number of robots we have,” Osborn says. “Besides safety and ergonomics, we’ve also found robots can help with social distancing, which is essential with COVID.”

Masters Gallery produces hundreds of varieties of cheese products for its customers, whether it’s a grocery store looking for cheese in slices, bars, shreds and sticks, 5- and 10-pound packages of cheese for its foodservice operators or cheese blocks (some weigh up to 640 pounds) for its industrial customers.

Robots that can adapt to changes easily are essential in managing that volume and diversity of products. Lenz says the company also will likely add more robots due to the unemployment levels. “Workers are hard to find and this kind of technology helps to offset that,” he says.

Wilson says as more manufacturers struggle to find the right talent, the demand for automation will only increase. “If automation is used with a job, more people may be able to do it, opening up the work to more individuals,” he says.

COVID-19 also has spurred increased interest in robotics, which can provide additional security for manufacturers. Robots can help allow for social distancing on plant floors and keep productivity at stable levels if employees are sick or in quarantine, Wilson says.

The decision to add automation to a manufacturing facility isn’t one that’s made overnight. It takes time and research to determine if and what types of robots would be beneficial for the company.

Wilson works with a variety of small- to mid-size manufacturers, from those that are just starting out on their journey using robots to those that already know what they want. “Businesses all have different experiences, and I work with them where they’re at,” he says.

When beginning, manufacturers need a solid business case to use automation and most can start out with low-risk projects.

“If you have a solution that solves an existing problem — perhaps a job no one wants to do — you can get buy-in from workers,” Wilson says.

For manufacturers interested in starting out with automation, WMEP offers several services to help, including doing a facility-wide assessment.

“We’re unique in doing that,” Wilson says. “We put together a priority chart looking for a quick-ROI, low-risk problem to start with. We discuss what other projects they may want to work on and we put it all together in a document for them to follow.”

“A lot of manufacturers are looking at automation. Finding and keeping workers remain a challenge,” he says. “Adding automation is a good opportunity for current employees to learn new skills, which is something companies can talk about.”

Automation does not come without its challenges, including keeping the machines running, Wilson says. “It’s important to have someone on staff trained to maintain the machines and fix small issues or to bring in someone who can do that,” he says.

But looking at the whole picture, Nikolai says automation makes the work experience better for employees. “That can contribute to the bottom line with recruiting, retention and safety improvements,” he says.