Waupaca Foundry earned 2018 Metalcaster of the Year in recognition for its commitment to sustainability.

The metalcasting industry has been recycling metal since the process was born, but Gary Gigante felt it was only scratching the surface. Eight years ago, Gigante, the now-retired president and CEO of Waupaca Foundry, delivered a strong message to the industry urging metalcasters to work harder to improve their efficiency and minimize their waste. In his 2010 AFS Hoyt Memorial Lecture, Gigante called on the industry to embrace the possibilities of sustainability and start thinking green in all aspects of the process. Within Waupaca Foundry, significant sustainability goals were set for 2020 to lead by example.

"He wanted Waupaca to take a leadership role in this initiative to show it is important for the industry and for the viability of our company," said Mike Nikolai, CEO, Waupaca Foundry. â€œHe defined what our targets would be and formed how we look at sustainability. The good thing is, it makes financial sense in the end.â€

Although Gigante retired in 2016, his legacy lives on at Waupaca Foundry, which has accumulated a long list of sustainability accomplishments as it nears 2020 and the end of its first 10-year sustainability initiative. 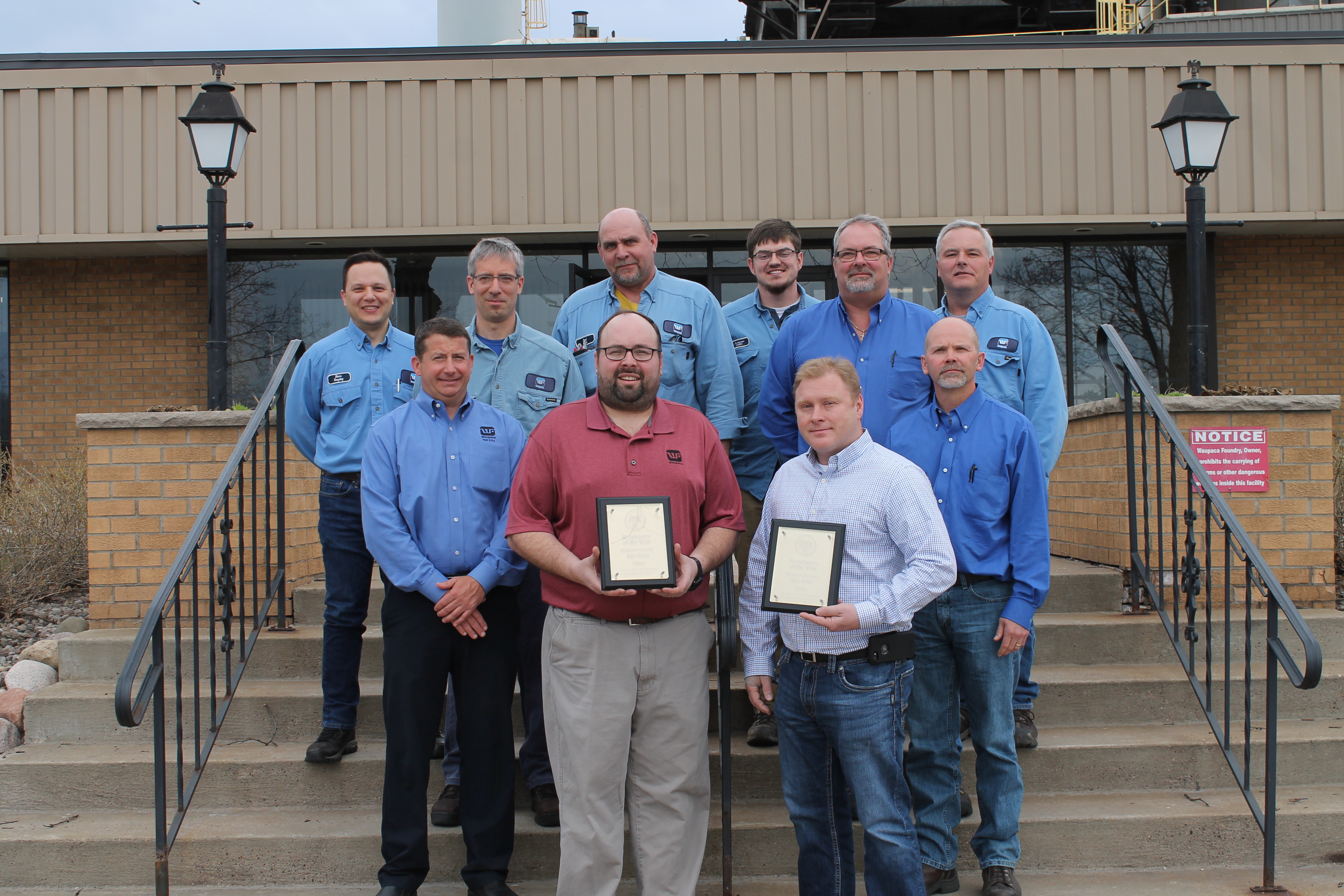 From 2009-2016, Waupaca Foundry reduced its cumulative energy intensity by 18.9% as a voluntary charter member of the U.S. Department of Energy Better Plants program. Landfill waste has been reduced significantly, with 71.3% of all byproducts now avoiding the landfill altogether.

In 2017, its Plant 1 in Waupaca, Wisconsin, became the first U.S. metalcasting facility to receive the accredited ISO 50001 Energy Management System certification. Plant 2/3, also in Waupaca, has made significant reductions in energy by improving the yield of its highest volume parts. Additionally, installation of a mechanical and thermal sand reclamation has reduced that waste stream and closed loops in compressor and heat recovery systems have reduced energy and water use.

For the significant sustainability efforts and accomplishments, Waupaca Foundry plants in Waupaca, Wisconsin, have been named the 2018 Modern Casting Metalcaster of the Year.

Reducing Energy Through Management
Plant 1's ISO 50001 certification is one of the pinnacles of achieving a management approach to reducing energy use at Waupaca Foundry.

"It's basically showing that as with environmental and quality systems, we have the equivalent level of focus and available metrics to monitor energy and have the procedures in place to affect continuous improvement," said Bryant Esch, environmental coordinator, Waupaca Foundry. "We are not chasing projects anymore. Plant 1 dove in and did a fantastic job being enthusiastic and ultimately successful."

Using a similar format to quality ISO certifications, ISO 50001 directed the gray iron plant to identify significant energy users and score and rank them. The facility uses coke, natural gas and electricity for its energy and Waupaca had to find a common way of measuring the usage. It settled on million BTUs per ton of iron melted.

"Controlling energy in a foundry is complex because a lot of variables are going on," said Marco Gonzalez, Waupaca's energy manager. "Generally, we needed to show how we related energy to production. To achieve that value, we have to dive into the processes and look at things like how much coke is used to melt a ton of iron, how efficient are the furnaces to melt that ton of iron, or how efficient are the mill room processes."

Waupaca looked at not just usage but also cost and took the same approach toward natural gas and electricity. The energy team determined that 70% of energy use at Plant 1 was related to melting a ton of iron but 20% of the energy was actually going to environmental control equipment.

"This is the analysis part of ISO that gives us focus of where to look," Gonzalez said. "We have to look at the 20% of the equipment that generates 80% of the consumption."

By identifying the major energy drains and using the million BTUs per ton of iron melted, Waupaca Foundry could start to see where improvements would generate the biggest impact. This approach is not limited to Plant 1, although it is the first plant to achieve the ISO accreditation. Gonzalez and Esch both work on the corporate Waupaca Foundry level, supporting the environmental and plant managers at all Waupaca facilities to achieving compliance and energy reductions.

At Plant 2/3, one of its biggest energy reductions came through an improvement in casting yield.

"Waupaca is good at collecting data and we are putting all the data together to generate relevant information to put us on the right path," Gonzalez said. "Yield relates to how much ton of iron is melted and how much tons are in the final product. So, if we improve the yield, we definitely reduce the energy we need to produce the final piece."

The higher yield improved more than energy use.

"We were in a situation where we were running out of melt capacity," said Todd Pagel, plant manager at Plant 2/3. "By improving our yield we were able to give the melting area some breathing room. Once you run into a production limiter, like iron supply, how do you chase productivity? Well, this was one way."

At Plant 1, which has a more diverse mix of parts than Plant 2/3, it recently has focused on making equipment upgrades to its compressor systems. It installed a new air-cooled two-stage rotary screw air compressor, replacing a water-cooled reciprocating air compressor unit that was more than 30 years old. The $124,000 investment yielded not just compressed air and energy reduction. The plant reduced its water use by 7 million gallons for a $70,000 annual savings. It also saves $6,500 in maintenance costs annually.

"We were also able to reuse the waste heat to heat portions of the building with the compressed air system," said Dale Hardel, engineering manger. "This project proved that like anything else, if you put a team together, focus on a problem and attach it in a methodical manner, you can make improvements."

The Waupaca Way
The focus on sustainability is built into the culture of Waupaca Foundry, according to several members of its managing team. This is reflected in the major categories outlined in the corporation's Waupaca Way production management system approach to safety, environmental, people, quality, responsiveness, cost.

"We are talking environmental at the corporate level, plant management level, down to the shop floor level," Pagel said. "It is integrated in everything we do and it is supported and built into the management system."

Waupaca Foundry holds monthly operations reviews where each plant reports to the corporate management team its performance on various aspects of the plant including sustainability. At the plant level, sustainability is addressed in monthly meetings, and appointed energy teams meet every month to discuss ongoing projects and opportunities. Esch and Gonzalez, as the corporate environmental coordinator and energy manager, supports the plants by providing information and data on where reductions could be made.

"Bryant and Marco really provide the plants direction and resources we need to implement good ideas. It's not that simple, but it really is," Pagel said. "It's baked in the cake; it's the way we operate."

In 2014, Waupaca Foundry was acquired by Hitachi Metals Ltd. (Tokyo).  New ownership could have derailed the sustainability goals, but Hitachi's view on sustainability aligned with the Gigante's vision and the established culture within Waupaca.

"Hitachi Metals has a strong environmental initiative in the U.S. and has a longer-term outlook for it," Nikolai said. "A lot of our low-hanging fruit—the ones with an ROI of three-to five-years—is gone, so now we are looking at 8-10-year payback, and they support that."

360-Degree Input
Waupaca Foundry at the corporate level has directed its plants to always have two potential energy-saving projects "shovel-ready," so when the decision to invest is made, the project can be implemented quickly. Gonzalez helps keep the pipeline of projects open by analyzing the energy data, calculating costs and giving plants the information they need to prioritize.

"Marco has taken on the responsibility of saying, "I'm going to research the systems and put the costs together and the costs will speak for themselves," Pagel said. "We want to put the fewest capital dollars into a project that will have the most impact."

Each plant's energy teams will present business cases for capital projects to improve energy usage. Once approved, a special project team is formed, which meets at least weekly until the project is complete. The project teams involve individuals from different areas of production, including engineering, maintenance, and team leaders.

"We are on the front lines developing and implementing the plans that Bryant and his team bring forward to the plants," said Paul Thiel, engineering manager. "We are doing the nuts and bolts part on the engineering side. Our maintenance managers, engineering team, floor personnel—those on the production side—all have ideas on improving our processes and those filter from the bottom up."

Waupaca Foundry strives to ensure all projects are for the collective good of each aspect of the company, so a project to improve energy efficiency should not end up hurting the quality of the product, nor should a core room expansion be detrimental to the closed loop compressor system. To achieve this balance, each affected area of the business is involved in the decision making process.

"You have to engineer projects so they are friendly for maintenance folks to maintain because if you can't maintain it, it will boil down to a production issue," Pagel said. â€œBy engaging those who not only are designing the project but also have to live with the result, you have a lot better chance of having success."

This team approach gives Waupaca employees a vested interest in always working with improvement in mind. And environmental issues are responded to with the same urgency as production issues.

"If something messes up where maybe the closed loop system shuts down, or we notice a leak, it is maintenance's responsibility to identify the issue or problem, take care of the issue, and then inform everyone about what happened," said Andrew Sellin, environmental engineer. "I don't see our goals as something we hope to achieve, but something we will achieve."

Plant 1 will soon be implementing dashboards to help make the energy efficiency goals and progress more visible to plant floor associates. Soon, departments will be shown visual utility bills, as Dale called them, to manage their energy impact and try to make improvements.

"We have a legacy of continuous improvement and this is an extension of that," said Sara Timm, marketing and communications manager. "The folks who work for Waupaca Foundry are very engaged and contribute a great deal."

Waupaca Foundry's 10-year sustainability plan launched in 2010 already has proven to be successful in reducing its waste and water and energy consumption considerably. Organizations and customers are noticing. In 2017, It received the Excellence in Energy Efficiency Award from Wisconsin's Focus on Energy Program, and the Environmental Stewardship Award from Kawasaki Motors Manufacturing Co.

"Sustainability goes back to our continuous improvement culture," Nikolai said. "You can get credit from customers for the cost reduction—they recognize you are not only doing something good for the environmental but also something that is good for their costs long term."