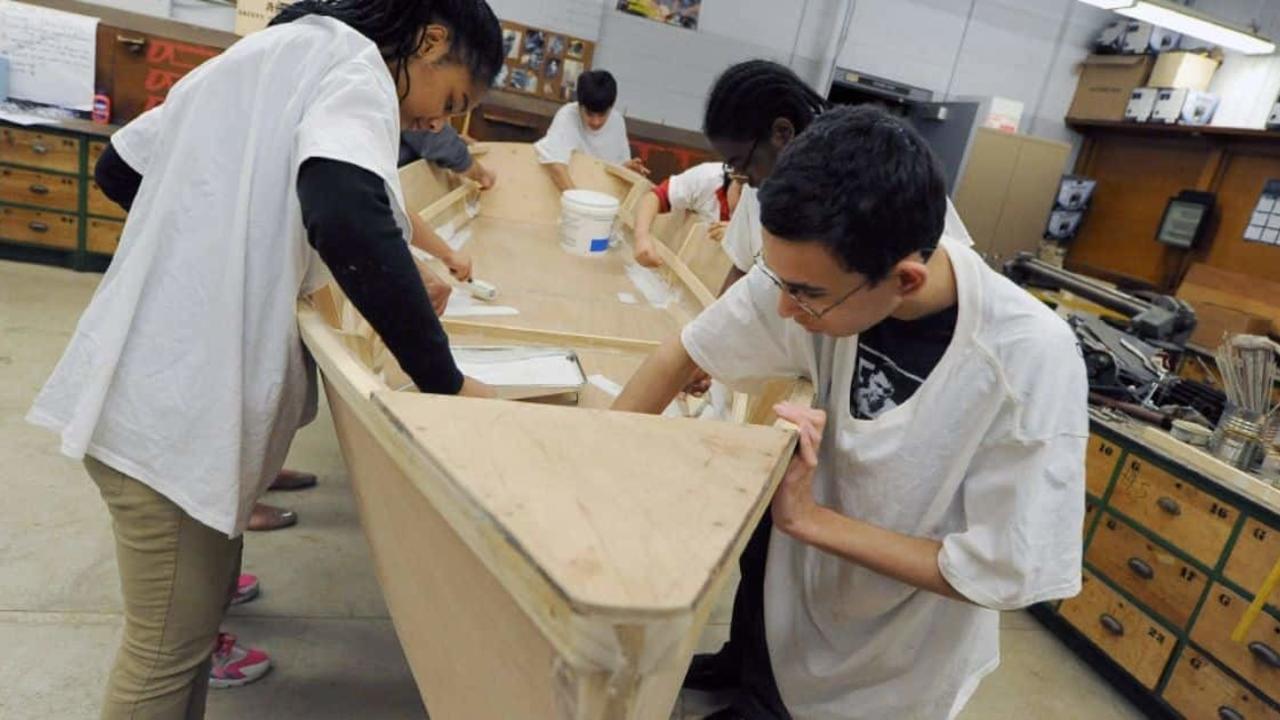 Positions in the skilled trades are the most difficult to fill for employers worldwide for the fifth consecutive year, according to Milwaukee-based ManpowerGroup.

To address the talent shortage, the Building2Learn Consortium in Milwaukee is encouraging more students to learn basic carpentry skills and pursue careers in the skilled trades.

In the program, students from various schools recently worked alongside an industry adviser to build a 12-foot wooden skiff, a flat-bottomed boat. The hands-on program taught students applied mathematics, team-building and how to understand technical documents.

The B2L board decided to start with a construction-based project because that is where demands are the highest. However, the program also will provide students with a strong foundation for manufacturing jobs, said Danny Goldberg, B2L board executive.

In the aftermath of the financial crisis and housing collapse, the construction industry saw a dip in employment. As the economy recovered, companies such as C.G. Schmidt struggled to find experienced workers.

“When we tried to ramp back up in 2014, the quality of workers was far below what we brought on board before,” Schmidt said. “It was a plan B for a lot of people. Plan A was college for everyone, but you can make a career with trade skills. It’s a family sustaining career.”

Schmidt said students who start with apprenticeships will have less debt than students who go straight to college.

The average carpenter makes $16.10 per hour at the beginning of an apprenticeship. By the time they are 95% through the apprenticeship, they can earn up to $33.99 an hour.

“They won’t have as much ... debt because they get paid to learn,” Schmidt said.

Goldberg noted that students do not have to choose between the two. Students have the option to work through school or save up and then go to college.

B2L board members and instructors want to provide students with a real-world industry experience.

“I tried to model what they would expect coming onto a job site,” said Bill Nimke, president and founder of All Hands Boatworks, a delivery partner for special projects in the B2L Consortium. Nimke was one of the advisers for a group of students from Pulaski High School and Carmen Schools of Science and & Technology who crafted the boat and painted it last week in the basement at Pulaski.

A’Johnay Williamson, a freshman at Pulaski, recalled when a miscalculation caused a part of the boat to crack and they had to start a step over again.

“It taught me something so little could be so important,” Williamson said.

As the project progressed, Bheyon Winters, a freshman at Carmen Schools of Science & Technology, also noted the need to apply math skills in the project.

“I’m a visual learner,” Winters said. “It’s easier when I see it and can apply it to what I do.”

By the end of the project, Winters said he could envision pursuing a skilled trades career. His goal ultimately is to work as an engineer for the military.

Besides the mathematical and technical skills, Nimke said he hopes his students gain self-confidence.

Some of the students said learning to work together on a project also was an enlightening experience.

“It was hard because we didn’t know the Pulaski students,” said Nicholas Ramczyk, a freshman at Carmen. “After so long, we got to know everyone, and we had to collaborate and use our different skills.”

One of their final tasks was to name the boat. They decided to call it “Coming Together as One” as a tribute to the collaboration between the two schools.

The boat will be launched in the Menomonee River in the spring.