The Trade War Is a Farce 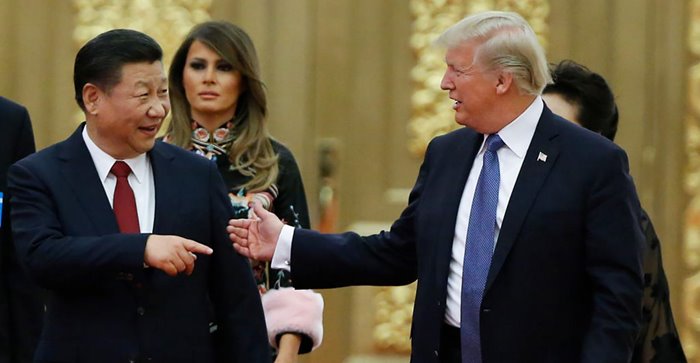 The Trade War Is a Farce

Reshoring is the future, but manufacturers have no idea how to fill the more sophisticated jobs that it requires.

As the World Economic Forum (WEF) annual meeting continues in Davos, Switzerland, this week, discussions around global trade, the future of advanced manufacturing, and the Fourth Industrial Revolution are at an all-time high. In particular, the popular news media has been making a daily diet talking about the U.S. trade war with China.

Unfortunately, they are missing the real story: the potentially profound effects of reshoring on U.S. manufacturing and on the widening skills gap.

A few reports are seeing the fumes of the real story but miss the overall point. News articles have surfaced about the success of apprenticeship programs in Germany, especially in the manufacturing sector, and how the U.S. government is evaluating similar systems. This at least points in the right direction. In 2017, president Donald Trump signed an executive order to double the amount of funds for apprenticeship programs, to $200 million, but some argue that the initiative is still a work in progress. A growing sentiment that “not everyone can be or wants to be a programmer in Silicon Valley” is gaining traction as well.

The real story is that manufacturing is coming back to first-world countries, and we have no idea how to fill these new, more sophisticated jobs.

As it turns out, 2016 was the first year where net manufacturing job loss reversed with a total net addition of 30,000 jobs, according to the same report. To put a finer point on the magnitude of staffing and organizing these new jobs, there are still an estimated 3 to 4 million U.S. manufacturing jobs overseas.

Many of these will return to modern factories near their markets.

Why Jobs Are Coming Back

At a recent meeting of the WEF that I attended, the point was shared that several countries, including Vietnam, now understand this outcome and are very worried. These countries thought that as China priced and aged out, they would pick up the manufacturing mantle and reap its rewards.

The reality is, as technology removes more and more labor from the manufacturing process, the reason to seek cheaper labor overseas no longer makes sense. Manufacturing becomes very advanced with fewer higher-end jobs. While these jobs pay well—and there will be a fair number of them as a huge amount of manufacturing returns—that higher pay ends up being a rounding error on the total cost of production for any one company.

At some point in the 1980s, the U.S. decided that we had reached the pinnacle of manufacturing, that technology wouldn’t advance further, and the only logical next step was to move production overseas. This erroneous conclusion ended up being a Marshall Plan for the world as we installed state-of-the-art factories—living classrooms—in far-flung places. As these companies devolved into commoditized brands or the laggards continued to squeeze remaining value from aging plants and equipment, the investment world began trading these companies like postage stamps.

Of course, these sweeping conclusions don’t apply to every company or industry. There are many companies that stayed the course and continue to innovate in consumer products, food production, strategic manufacturing, and energy. What does thread through these companies—Corteva Agriscience (formerly DowDuPont) and Schlumberger are just two examples—was a need to stay physically close to their markets.

As it now becomes advantageous to be near your market as overall labor costs will no longer be a factor, the peers of these companies in other sectors need to take a page from their more strategic brethren.

Attracting the Next Generation of Industrial Workers

Individually, companies need to embrace the concept of reshoring and start designing their factory of the future now. They also need to consider what technologies will augment these workers to quickly deliver the precise and demanding work needed to staff their next-generation factory.

One massive effect of reshoring, which we are already seeing, is that advanced manufacturing jobs are increasingly becoming sophisticated jobs that contribute to the widening skills gap; the 2018 Deloitte and The Manufacturing Institute Skills Gap and Future of Work Study predicts that an estimated 2.4 million positions will remain unfilled between 2018 and 2028, with a potential economic impact of $2.5 trillion.

They may not all start with an advanced degree, but, in modern factories, workers program CNC machines, PLCs, and robots, tune advanced automation, and work with sophisticated software. Not only are these advanced jobs, they are cool jobs that command strong salaries.

Collectively, manufacturing and industrial work in general will need to market these advances to convince generations Y and Z that these jobs are cool not by overselling them, but by making them actually cool.

In advanced manufacturing, the ability to manipulate atoms is becoming almost as easy as the ability to manipulate bytes. This appeals to a generation of makers and doers that have already been unleashed in most first-world societies. What we aren’t doing is connecting the dots between those who like to work with their hands—and who try to find an outlet for this in their side gigs—and these great new, well-paying day jobs that could give them an amazing sense of fulfillment.

Rulers of the Future

We’ve really missed the point giving the trade war so many column inches. While the cost of aluminum may sting now if you are importing, it’s an effect of the death throes of a model of production from the end of the last century. Manufacturing and industrial companies that rule the future will reshore.