Under NAFTA, at least 62.5 percent of the material in a car or light truck made in the region must be from North America to be able to enter the marketplace tariff-free. 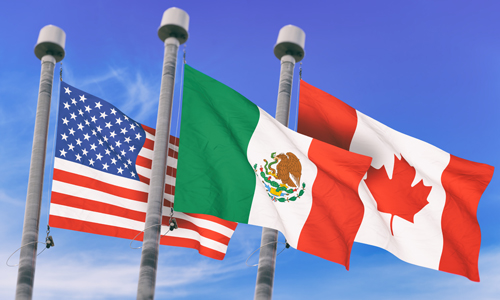 The comments came two days before trade negotiators from Mexico, the United States and Canada meet for a fourth round of talks on revamping the North American Free Trade Agreement in Washington.

President Donald Trump argues NAFTA has hollowed out American manufacturing, in particular in automaking, and fueled a U.S. trade deficit in goods with Mexico worth over $60 billion.

He has threatened to ditch NAFTA if the deal cannot be reworked in favor of the United States.

Last month, the Trump administration released a study showing that U.S. value-added content was declining for manufactured goods imported from Mexico and Canada.

However, Mexican Auto Industry Association (AMIA) president Eduardo Solis told a news conference the figures did not tally with the group's own analysis, which found that U.S. content in Mexican parts and components ranged between 37 percent and 39.5 percent, "depending on the scenario."

In the case of Canadian parts, the U.S. content varied from between 48 percent to 52 percent, said Solis, who spoke at a news conference announcing the latest Mexico output data.

Under NAFTA, at least 62.5 percent of the material in a car or light truck made in the region must be from North America to be able to enter the marketplace tariff-free.

Solis himself will participate in the five-day round of talks in Washington beginning on Wednesday.

AMIA data published on Monday showed Mexican auto output rose by 7.7 percent to 307,174 units last month compared with the same period a year earlier, while exports surged 15 percent to 270,899 vehicles. Three-fourths of Mexican auto exports are to the United States.

The AMIA data showed Mexican auto exports to Europe surged in September by 310.1 percent to 18,117 units.