United States Army Made Tooling Supervisor Who He is Today

On August 2, 1990, two weeks after Wade Gray, a now-Tooling Supervisor at Waupaca Foundry in Effingham, Illinois, joined the United States Army fulltime, Iraq invaded Kuwait, his base in Fort Benning, Georgia, was put on lockdown and Operation Desert Shield began. That was when Gray knew he would be going to war.

In Gray’s journey prior to this pivotal moment in his service career, he had always known — since childhood — he wanted to serve his country. From dreams of being an army ranger as a kid, Gray had a fever and want to go big and do big things.

Or as he simply puts it: “I wanted to serve my country, but it was my childhood dream most of all.” 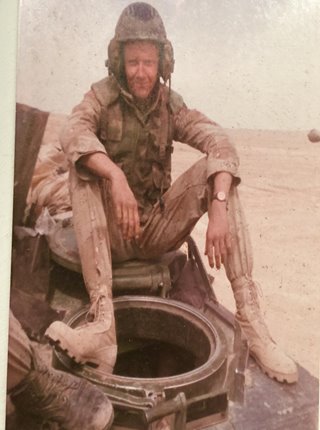 After graduating high school, in October 1988, Gray joined the Army National Guard. In July 1990, while a student in college, his call for adventure beat out his want to be in school any longer, and he enlisted for fulltime service.

When shipping out for Desert Shield to Saudi Arabia, Gray remembers the experience as a whirlwind.

After arriving, the first six months featured a lot of training and conditioning. Then, as Gray says it, “the real scary part started.”

He remembers at one point sitting on the border of Iraq and being able to hear bombs go off in the distance as bomber aircrafts flew overhead.

After four years, Gray decided it was time to find another adventure and left the army with the title of Army Specialist (E-4).

Gray began his civilian career at a machining facility in Shelbyville, Illinois, and stayed with the company for eight years. In 2003, he was laid off. The very next week, he started his career at Waupaca Foundry (formerly Hitachi Metals Automotive Components). He will celebrate his 17th work anniversary this December.

“Not a lot of people can say they enjoy their jobs, but I wake up, ready to go every morning, Gray says. “I enjoy working on tooling and troubleshooting and trying to keep the plant running.”

As Gray reflects at his time at Waupaca and his job prior, he can’t even believe himself that he has been in this line of work for almost 25 years.

Gray admits he did not have intentions to be at either workplace long term, but he now jokes “I’m not leaving until they kick me out.”

Even after almost three decades since being in the army, however, Gray still carries a lot with him from his army days when he was just a young man. From old war stories, to skills in leadership and responsibility, those early years at war have impacted who Gray is today.

Waupaca Foundry is proud to employ the men and women who have served our country. Ten percent of our employees have served in uniform, and we thank you for your service.