Depending on who you ask, it’s either the best of times or the worst of times for global trade. Protectionists villainize trade as damaging to U.S. workers, while on the other side of the coin pure laissez faire free traders consider trade as a pure positive for the United States.

Mexico and China frequently are labeled as scapegoats for U.S. manufacturing decline. Partially, this is because Mexico and China are currently our top two trading partners, comprising 15% and 17% of U.S. global trade volume, respectively. In addition, both have lower labor costs than the United States, so the perception is that they have an unfair advantage that leads to a “giant sucking sounds” of offshored jobs.

However, losing a job to China is much more damaging for the United States than losing a job to Mexico for three main reasons: The United States and Mexico have conjoined and complementary supply chains in many industries; Mexico generally plays by the rules while China willfully ignores international trade agreements; and trade with Mexico does not aggressively grow the U.S. trade deficit. I’ll break each of these down.

1. Mexico’s manufacturing sector is integrated with U.S. supply chains and success is shared.

Supply chains frequently stretch across the U.S.-Mexican border. In this way, the North American Free Trade Agreement (NAFTA) is working as it should. The United States and Mexico form a high wage/low wage partnership, bringing complementary labor forces, investments, innovation capacity, and industry strengths together to be able to compete globally. With strategic relationships with Mexico, the United States can keep the higher value-added components of industries befitting our comparative advantage as a high-wage, innovation-intensive country. For example, 40% of the inputs to finished manufacturing goods in Mexico from the United States.

By contrast, in China, that figure is a mere 4%. In essence, unlike trade with Mexico, when production goes to China, the United States loses out on much more of the production process. As Figure 1 demonstrates, when imports from Mexico go up, so do U.S. exports, too.

This is why the Reshoring Initiative, which actively advocates for companies to bring jobs back to the United States, tracks “nearshoring” as well as “reshoring” activity. Jobs moved from Asia or elsewhere to Mexico provide significant value to the United States, as inputs to the manufacturing process (as well as consulting services, R&D, and other higher value-added work supporting the nearshoring company) are frequently produced by U.S. firms.

Free trade agreements provide a set of rules for countries to follow. However, not all countries follow the rules. China is perhaps the world’s foremost violator, while on the whole, Mexico plays by the rules.

Since their inclusion in the World Trade Organization (WTO) in 2001 (at the beginning of a decade of precipitous decline in U.S. manufacturing employment, which several leading researchers show is more than coincidence), China has time after time ignored ATO rules in order to gain an unfair upper hand. David Autor of MIT has examined the effects of Chinese imports to the United States and concluded that they resulted in the loss of 2.4 million manufacturing jobs between 2000 and 2010, about 42% of the total jobs lost during that time.

Thanks to policies ranging from currency manipulation to blatant intellectual property theft, from localized barriers to trade to foreign equity restrictions, China ranks second to last  ITIF’s index ranking 56 countries on the quality of their policies and institutions related to maintaining free trade and global innovation. Mexico also scores below average on this measure, but when compared to countries at a similar level of development it does quite well. And its transgressions are much less egregious. Indeed, Mexico is, in the ITIF categorization, an Innovation Follower, a nation that while contributing relatively little to the global innovation system does little to harm it.

Meanwhile, China is labeled an Innovation Mercantilist, making modest contributions but severely detracting from global innovation. And Mexico has tied the success of its manufacturing industry to fair and open international trade. In fact, Mexico has more free trade agreements with foreign countries than the United States.

3. Trade with Mexico does not contribute to U.S. trade deficit. 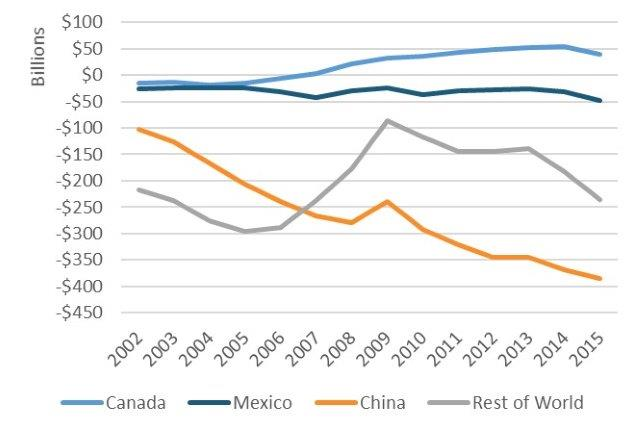 The widening deficit seen in 2015 is most likely due to the short-term effect of the rising value of the U.S. dollar. However, the United States deficit with Mexico is well within the parameters of what is expected, and until 2015, the United States ran an overall surplus with its NAFTA partners.

In contrast, Chinese exports to the United States almost match those of Canada and Mexico put together, while it imports less than 50 percent of the U.S.-made goods that the United States’ NAFTA partners do.

Figure 3: Ratio of Exports to and Imports from the United States, International Trade Administration 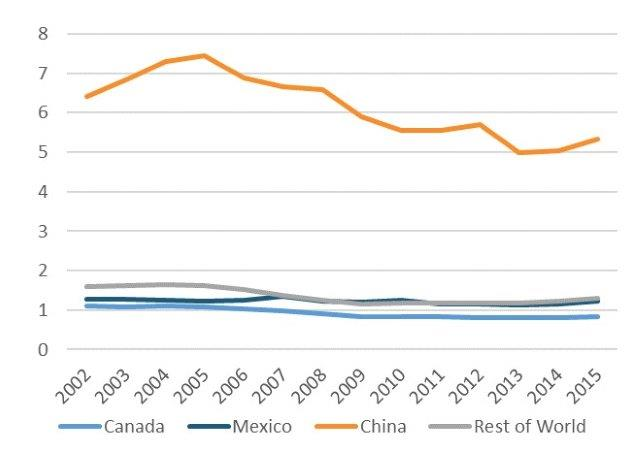 Though the total volume of U.S./Mexico trade has gone up substantially, the balance of trade has been consistently negative but low. China has a very different impact, shipping the United States over five times as many goods as they receive.

In summary, Mexico and China should not be grouped together in the debate over manufacturing, globalization, and protectionism. When a U.S. firm goes to China or is put out of business by competition with a Chinese firm, the United States gains little but loses much. However, the United States and Mexico have a more mutually beneficial trade relationship, and economic activity lost to Mexico is usually made up for in other parts of the manufacturing sector. When a job goes to Mexico, this is generally the result of market forces. Yet when a job leaves for China, often as not, it’s the result of carefully meditated moves by the Chinese government.

The differences in the United States’ relationship with these two nations show the need for a more nuanced discussion on trade. If the federal government spends it political capital on fighting Mexico, it will be much less able to mount an effective challenge to Chinese innovation mercantilism. In short, the Trump administration needs to choose its battles carefully. Engaging in a “skirmish” with Mexico will mean not enough resources to engage in a “war” with China.