Infrastructure under the street is more than 100 years old. Reconstruction of Main Street, from Badger to Water streets, is scheduled to begin in 2021. Gears are the proposed focal point in the intersection of Main and Fulton streets, representing Waupaca Foundry.. 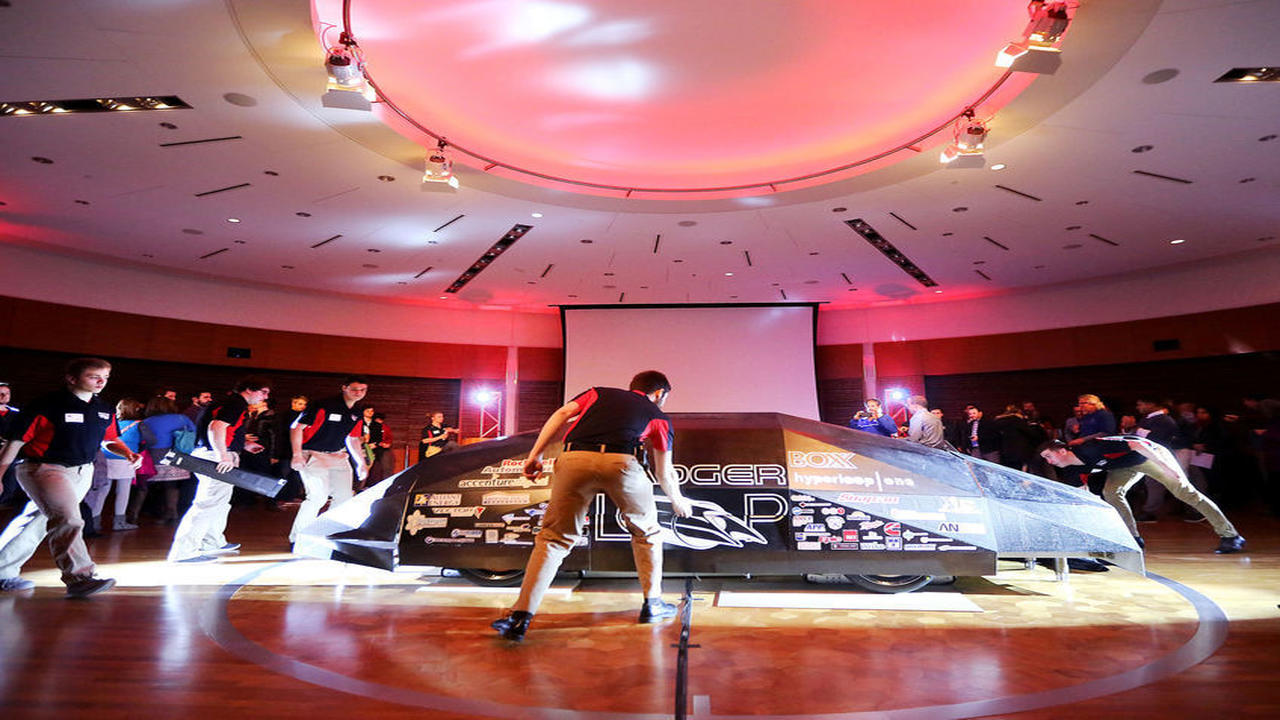 Late next month, the brainchild of a team of UW-Madison students will be loaded into a trailer and driven across country to a site south of Los Angeles, home to the headquarters of tech titan Elon Musk's company, SpaceX.

The 12-foot-long vehicle, which looks like a cross between a NASCAR racer and a walking pill bug, will be strapped onto an accelerator and thrown down a mile-long vacuum tube at speeds that will top out over 200 mph. A complex propulsion system that was built on campus will use an array of magnets to levitate the vehicle and keep it from losing speed. And at the end of the run, its brakes and a set of Goodyear tires will bring it to a stop, one mile and about 30 seconds after the trip began.

The high-speed run will be the culmination of months of work by more than 150 UW-Madison students, whose efforts could help bring Musk's idea for a Hyperloop — a revolutionary transportation system that would whisk people and freight around the country at hundreds of miles per hour — closer to reality.

Judges from SpaceX, the space transportation company Musk founded to one day enable people to live on other planets, will evaluate how the UW team's pod performed, comparing it to vehicles built by groups from colleges across the country and around the world.

David Van Veen, the president of Badgerloop, as the UW team is called, can remember hearing about Musk's Hyperloop concept when he introduced it in 2013. But while the senior engineering student from McFarland thought the idea was interesting — supporters say it could revolutionize transportation as we know it — Van Veen hardly considered the Hyperloop something he might play a role in creating.

"There's no way that I could actually help to build something like that," he said. "That's just a crazy idea."

But that's exactly what the Badgerloop team — and Musk — hope they will do.

Although the Tesla Motors CEO and PayPal executive introduced the concept, Musk hasn't actually gone about developing a Hyperloop system himself. Instead, he has opened up his idea to anyone who wants to go about creating it, and several companies not affiliated with SpaceX or its founder have sought to do just that — with varying levels of success.

In 2015, SpaceX invited college students and engineering teams to design and build their own Hyperloop pods, with the goal of "helping accelerate development of a functional Hyperloop prototype," the company said.

'Shooting for the stars'

A group of engineering students at UW-Madison answered the call that summer and founded Badgerloop.

Since then, the UW group has grown to include engineers, business students and a marketing team. Members have sold sponsorships and struck agreements with companies for equipment and financial support; developed virtual reality experiences to show the public what their transportation system could one day look like; and built the pod itself, a process that involved perfecting equipment to function while hurtling through a vacuum at high speed.

Badgerloop did not receive student organization funding for the project, Van Veen said. And while the group has a faculty adviser and members sought help from other professors to build the pod, Badgerloop was led by full-time students, most of them undergraduates.

At a SpaceX competition last January, the design concepts for Badgerloop's pod placed third among international competition, losing out to teams from the Massachusetts Institute of Technology and Delft University of Technology in the Netherlands.

Calling to mind the showy product launches of Silicon Valley, the students revealed their carbon-fiber prototype pod Dec. 6 at the Wisconsin Institutes of Discovery with a dramatic video and professional lighting.